In many modern warehouses, IBC tanks are frequently used to transport various liquids, powdered, food, and other products, but did you know that they were only invented about thirty years ago?

Intermediate bulk containers (IBCs) first emerged in 1992, when an employee at a manufacturing firm sought an alternative to storing materials in unwieldy 200 litres drums.

In the past, manufacturers primarily stored liquids, powders, and other goods in 200 litres drums, but their cylindrical shape made them inefficient for storage and difficult to fill, transport, and empty. This prompted a man named Olivier J. L. D’Hollander to invent the first IBC.

IBCs were thus designed as an improved industrial storage container. They are more space- and cost-efficient than traditional steel drums, and their cubic shape makes them easier to store and transport.

After D’Hollander patented his original IBC design in 1993, many companies began manufacturing these containers, and the modern IBC quickly became the industry standard for storing materials from food products to cosmetics.

Today, you can find numerous IBCs with various features and specifications for different industries, and the industrial packaging industry is constantly developing new IBCs to meet their clients’ needs. 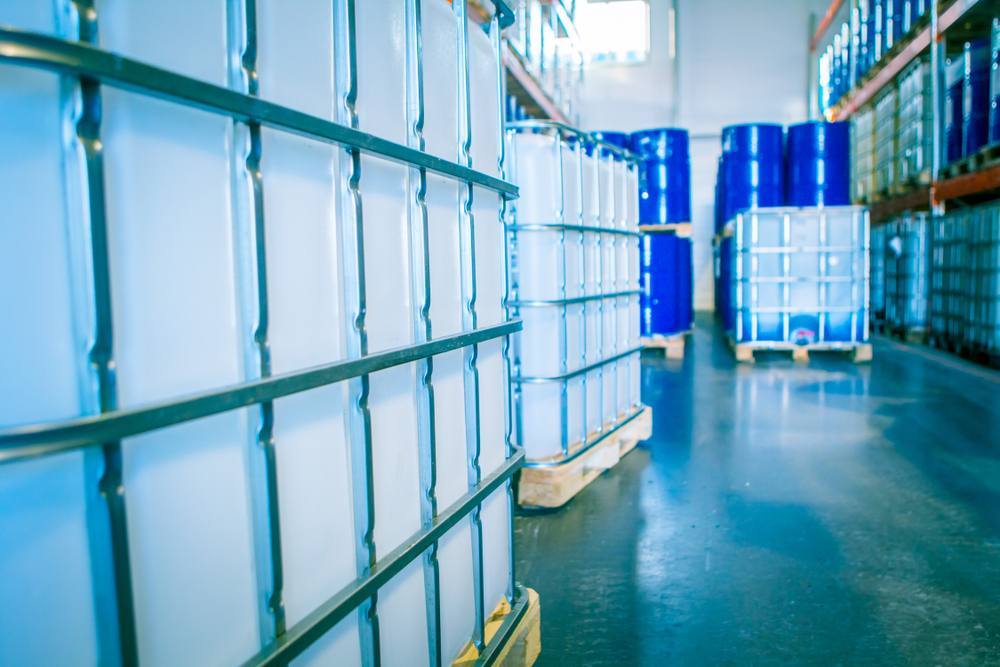 The Invention of the IBC Tank

In 1992, Olivier J. L. D’Hollander invented the first IBC tank while working at Dow Corning S.A.—a company that manufactured silicone products along with other adhesives, sealants, and solvents.

D’Hollander primarily invented the IBC to provide a better alternative to 200 litres drums, which were used in most industries to transport liquid and powdered goods.

The first IBC container looked quite similar to a standard IBC tank today. D’Hollander’s IBC tank included a square container mounted to a pallet with a protective metal cage surrounding the tank. Overall, the IBC’s design was meant to mitigate many of the inefficiencies associated with using 200 litres drums.

This section will discuss why D’Hollander invented the first IBC as well as why his invention quickly became so successful.

Why Was the IBC Invented?

D’Hollander and his associates invented the first IBC as a solution to many of the problems caused by using 200 litres drums to store and move materials.

Before the invention of IBCs, most manufacturers used these drums to transport liquid and powdered goods. In many industries, these containers were standard because they could securely store a variety of materials, including corrosive or volatile substances.

However, companies often encountered problems with using 200 litres drums as their primary storage containers—particularly when shipping, filling, and storing them.

First, transporting these drums could be a difficult process. Their unwieldy cylindrical shape made them difficult to stack and maneuver, and to prepare them for shipment, workers needed to individually transport each one either onto pallets or onto a truck. Furthermore, 200 litres drums had to be firmly secured to pallets and trucks to ensure that they would not tip over during transit, making the process of packing them very time-consuming, and even if they were properly strapped down, accidents would still occur.

200 litres drums were also hard to fill and empty. Most of these drums could only be opened from the top, so workers often needed to use specialized tools and devices to extract liquids or powders from them.

Finally, steel drums were not particularly efficient for packing and storage. When packing cylindrical containers, a significant amount of “dead space” between barrels is inevitable, so valuable storage space is lost when using 200 litres drums.

As a company that primarily manufactured liquid materials, Dow Corning frequently used 200 litres drums and encountered all of the issues that come along with them. D’Hollander and his associates thus sought a simpler alternative to these drums, and consequently, they invented the first IBC tank.

Why Was the First IBC Successful?

D’Hollander’s invention quickly became successful within his company and among other manufacturers thanks to its efficiency and usability. The first IBC tank strongly resembled today’s standard IBC tank, and it was carefully designed to mitigate the inefficiencies of 200 litres drums.

The original IBC was square-shaped and attached to a standard pallet, which made it more stable and easier to pack and store in a warehouse or shipping container. Its larger size and cubic shape also allowed it to store more material in less space, and because it was attached to pallets, the IBC was optimized for use with forklifts and pallet jacks.

This IBC tank design secondly minimized spills and accidents in the warehouse. Its square shape made it inherently more stable than cylindrical drums, and stacked IBCs do not need to be secured as extensively as pallets of drums. The IBC’s improved design thus made falls, spills, and other issues less likely to occur.

Finally, workers could more easily fill and extract material from IBCs. These containers could be customized with various openings, valves, and spouts, allowing workers to more efficiently utilize their contents.

D’Hollander’s IBC tank ended up being a success, and he patented the invention in 1993. In his patent, he described the IBC as a stackable, rectangular container with a base that can accommodate a standard pallet. 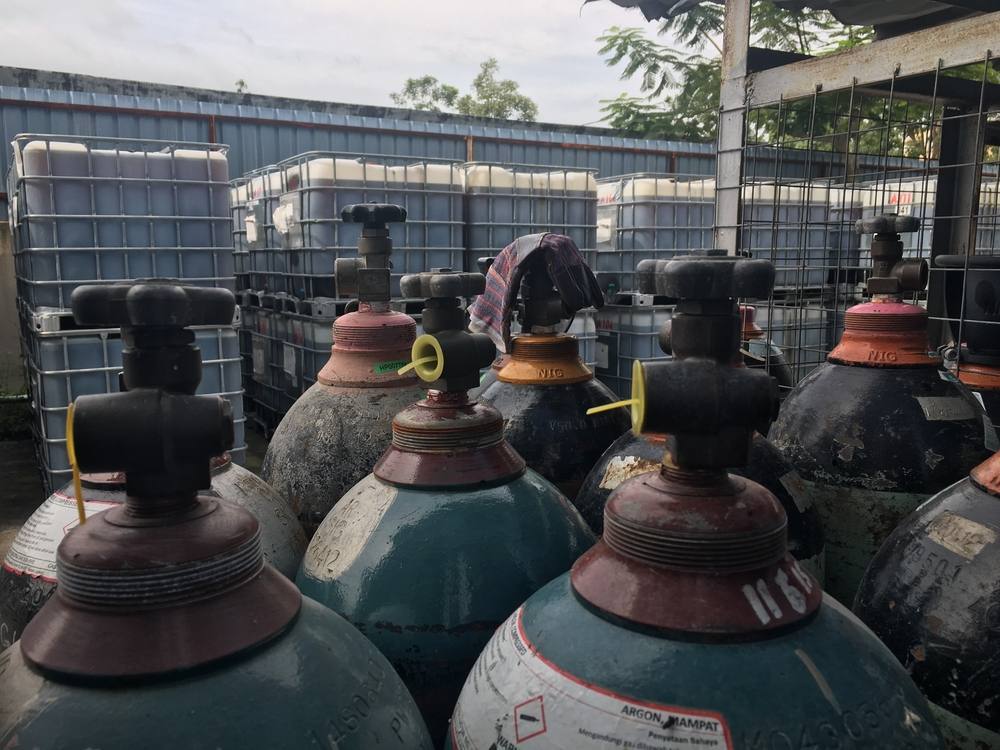 After D’Hollander filed his patent, the standard IBC tank was born, and many manufacturers began producing their own versions of this utilitarian container.

At first, most companies utilized IBCs for their initial intended purpose—storing and transporting powders, liquids, and other substances for manufacturing and wholesale purposes. Over time, however, many people found new uses for IBCs, such as food storage and rainwater collection.

The IBC thus quickly became a standard storage container in many industries, but some users encountered a handful of issues with the product. For instance, mixtures would often settle in these large containers, and IBCs’ metal protective cages were not suited for manufacturers producing flammable goods.

Given the utility of these containers, however, IBC manufacturers sought solutions to those types of problems and adapted their product to suit their customers’ needs, and as such, the modern IBC was born.

The following section will, therefore, discuss how the IBC became widely used across many industries, the problems that arose with standard IBCs, and how IBC manufacturers adapted to those issues, creating the modern IBC.

The Many Uses of the IBC

The IBC was first invented at Dow Corning, which primarily manufactured industrial, silicone-based products, so naturally, many IBCs were first used by companies to store and ship these types of goods.

As IBCs became more popular among manufacturers, other industries became interested in using IBCs, and many adopted them for storing and transporting certain products. Food manufacturers, for example, found that IBCs could store liquid and powdered goods more efficiently and that the container’s nozzle was efficient for dispensing liquids.

Today, IBCs are commonly used in a variety of industries, including:

However, despite the IBC’s widespread use, its basic design—a container attached to a pallet with a protective cage—remains the same among most industries.

IBCs solved many of the issues associated with storing and transporting materials in 200 litres drums, but as their use expanded to multiple industries, a handful of issues began to arise.

One of the first problems that manufacturers encountered with IBCs was that mixtures would frequently settle at the bottom of these large containers. Companies had initially found efficient ways to mix ingredients in barrels, but given that the average IBC holds over 750 litres more than an average drum, mixing a solution in an IBC required much more effort.

IBC manufacturers adapted to this issue by creating mixers suitable for these containers, and they also began to allow companies to request specific features on their IBCs, such as larger openings.

Other issues arose in the food industry with IBC sanitation and food safety requirements. In food manufacturing, all containers and storage areas must meet rigorous safety standards to ensure product quality, and initially, some IBCs failed to meet those criteria. The wooden pallet that typically attached to the base of IBCs was not suitable for certain food production settings, and the container itself had to be precisely manufactured to avoid contamination.

To overcome these issues, companies that manufactured IBCs began to produce versions of the container designed to meet specific food safety requirements, featuring plastic pallets and food-safe materials. Yet again, the industrial packaging industry adapted to the needs of its consumers.

Similarly, companies that utilized flammable chemicals or whose facilities were considered EX zones initially could not use many IBCs—especially those with metal cages—because they were not up to code for those types of environments. However, like before, the IBC manufacturing industry recognized this need and created containers to suit those types of clients.

Today, various versions of the IBC are used in a wide range of industries to collect, store, transport, and dispense various substances.

For the most part, nearly all IBC designs resemble D’Hollander’s original IBC. Most IBCs that are currently on the market include a pallet-mounted, rectangular plastic tank with a protective cage surrounding the container.

However, many variations of this basic design exist. Some IBCs, for instance, are entirely made of metal while others omit even the metal cage. Some IBCs even feature cylindrical vats mounted to movable pallets. Overall, the industrial packaging industry has adapted its IBCs to meet its customers’ various needs.

Currently, the most significant trend in the IBC manufacturing industry is a major sustainability effort on the part of many companies. Although one of the most important benefits of IBCs is that they can be reused, some IBC buyers would frequently use and discard these containers, creating substantial amounts of waste.

To combat this issue, many industrial packaging companies have created internal recycling programs that encourage customers to recycle their IBCs. Some companies offer professional cleaning and repair services to ensure that clients can use their IBCs to their fullest extent, and others go beyond that and provide full-scale recycling services. These recycling services typically include cleaning services, refurbishment, and salvaging broken or worn IBCs. Likewise, these companies also encourage their customers to buy sustainably by offering steep discounts on used or refurbished IBCs.

In the 2020s and beyond, the IBC manufacturing industry will continue to pursue sustainability while adapting their containers to suit their customers’ needs.